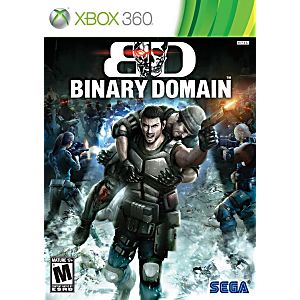 What do you get if you cross Vanquish with The Terminator? No, not some van-driving pest control bloke who calls himself 'The Verminator'. You get this - Binary Domain. A third-person shooter that wants to be the next Vanquish so badly, but can't help thinking about James Cameron films. It's all here – the glowing red eyes, the same 'endoskeleton holding a big gun' stance even the flying vehicles have an HK look to them. Not that we mind – there's a genuine sense of menace, especially when you look round to see the robot soldier you thought you'd just killed suddenly reanimated and crawling towards you like your name's Sarah Connor and you're standing near a hydraulic press.

Above: Is this man: A: A robot? B: Having a really bad day? C: All of the above The futuristic Tokyo of 2080 is overrun with 'hollow children' - robots which have have begun infiltrating the population. They're covered in human flesh who (what a twist) think they're human! Blade Runner, eat yer heart out.

So it's your job to take the fight to the headquarters of Amada, the corporation responsible, and stop them. That said, it's plain old metallic robots for the most part. Like all the best shoot-em-ups, these plentiful robot enemies have proper hit zones, with multiple stages of destruction allowing you to pick them apart with careful gunfire.

You get more in-game credits for shooting off as much armour as you can before finishing off with a kill, so there's even an incentive to do so. Main man Dan takes down another robot fiend Then there are the clever little touches, like the way headshots aren't actually kills – they just remove the brain from the body, causing the remaining legs, arms and torso to go haywire, attacking anything in the vicinity – including their fellow robots. Gunfights play out in small areas dressed up to look like massive areas, giving you plenty of eye candy and sense of scale without spreading the action too thinly. There's a cover system similar to Gears of War, which is decent, but somehow often lets you get shot anyway, meaning the small wait for health regeneration is frequently pushed back by a lucky stray bullet. Above: The scenery has some destructive elements - some of which you might not expect But you're not alone in your battle.

This is a squad-based shooter with optional microphone support, meaning you can (supposedly) command your fellow squad-mates with your own voice. In a quiet room, it recognises words very well, especially once you've fiddled with the background noise threshold. 'What you sayin', bro?' However, when we played it in our office (which isn't that noisy in honesty), it struggled to understand what we said. We pushed up the noise gate a little, but then we had to shout, which isn't always practical. Fortunately, you can hold the left shoulder button to bring up a list of four commands at any one time, but it doesn't always suggest the one you need.

'Binary Domain is the sleeper hit of 2012: an engaging robot shooter packed with everything that makes a game worthwhile.' Positive+ Interesting story and setting, topped up with witty and great.

All of that is made redundant, however, by the dopey squad AI. Your teammates frequently jump into your line of fire, even when you've already been unloading for a good few seconds and then they not only complain about it, but they like you less. The less they like you, the less willing they are to co-operate. Unprofessional much? Above: What a motley crew. Nero 8 serial free download. Will they like you or hate you? It's a neat idea for a squad system (in theory) and it does feel good to answer a question with the 'right' answer and see their little blue arrow blink away showing that you've gone up in their estimation.

But when you shout 'cover me' and they say 'I'm on it' before doing nothing of the sort, it kinda makes the whole thing redundant. When you're not knee-deep in robots, there are some fun diversions. Ableton live 9 crack mac torrent. One section sees you piloting a jetski while another sees you shooting from a speeding car, turret-style. There's also a decent monorail shootout, but again, it's so much like Vanquish yet never quite hits that game's level of quality. Above: Some bosses are vulnerable to regular shooting, but most need set-pieces to finish them off At least the script is a good laugh. The game is cleverly written to allow you to choose your own teammates from the pool of five(ish), effortlessly swapping in one stereotype for another without so much as a seam to show for it. Companions question your team selection at times, even suggesting that you chose Faye because you wanted to perve at her.